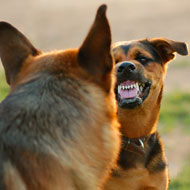 Among the most common types of "undesirable behaviour" included aggression, conflict with other pets, and attacking other dogs.

A recent VetCompass study of dogs under the care of primary-care veterinary practices in England that died before three years of age showed that more than a third (33.7 per cent) died because of “undesirable behaviour”.

Scientists found that dogs with the highest risk of death were males, crossbreeds and certain breeds (the cocker spaniel, West Highland white terrier and the Staffordshire bull terrier).

Moreover, the study concluded that dogs that exhibit undesirable behaviours may also be at risk of compromised welfare. This is either because of their own underlying emotional states (anxiety or fear) or because of the way owners try to rectify the problem (e.g. the use of electric shock collars).

“Our results highlight the importance of owner education regarding dog behaviour and what is natural behaviour for dogs to exhibit,” explained study co-author Caitlyn Boyd from the Royal (Dick) School of Veterinary Studies. “Human perception impacts whether a behaviour is deemed desirable or not. For example, one owner might not mind a dog who digs but a different owner would find it unacceptable.”

The study was carried out by researchers from several veterinary colleges and published in Animal Welfare by the Universities Federation for Animal Welfare (UFAW). Among the most common types of "undesirable behaviour" recorded in the study included aggression, conflict with other pets, and attacking other dogs.

Caitlyn believes that improved education is necessary to enable owners to recognise “normal” healthy behaviour and identify emotional states, such as fear and anxiety. This would also help to improve the early reporting of behavioural concerns.

“Combining this with improved education of the veterinary profession offers opportunity for owners to find appropriate information on sourcing and raising a puppy and guidance concerning the management and potential resolution of undesirable behaviours,” she said.

“It is advised that young puppies are exposed to a complex environment in a controlled manner in order to produce a confident, resilient dog, who can cope with living alongside humans.