Your data on MRCVSonline
The nature of the services provided by Vision Media means that we might obtain certain information about you.
Please read our Data Protection and Privacy Policy for details.

In addition, (with your consent) some parts of our website may store a 'cookie' in your browser for the purposes of
functionality or performance monitoring.
Click here to manage your settings.

The nature of the services provided by Vision Media means that we might obtain certain information about you.
Please read our Data Protection and Privacy Policy for details.

MRCVSonline uses Google Analytics to track which articles/features are most popular, so we can focus on these areas to improve the user experience.

Logging into the website allows certain privileged features, for example, single click recording of CPD time. This cookie is destroyed each time you close your browser.

The 'savedDataPreferences' cookie is only used to prevent you from being asked about your data preferences every time you visit a page.

The cookie will only contain the value 'YES' and will expire every 365 days.

The 'PHPSESSID' cookie is used to store your session ID.

Your session ID is used to allow interactions between the MRCVSonline website and your browser, necessary during account login and form submissions.

If the website is viewed on an iPhone, iPad or iPod touch, the user will be offered the functionality of the iOS application that we have developed.

MRCVSonline cannot control these cookies from outside sources and we advise you to check with the relevant third party for more information..
Endangered tiger cub takes first steps outside 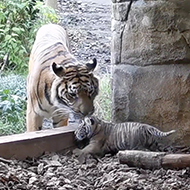 A rare Sumatran tiger cub has ventured outside at ZSL London Zoo.

A Critically Endangered Sumatran tiger cub has taken its first steps outside after being born on 12 December 2021.

Footage captured by zookeepers on Wednesday 12 January shows the cub following after its mother into the afternoon sunshine, clambering out of the outdoor enclosure into the grass.

ZSL London Zoo tiger keeper Kathryn Sanders commented on the special occasion: “The cub has so far mostly stayed tucked up with Gaysha in their cosy behind-the-scenes cubbing den, but with such lovely weather yesterday it’s clear she decided it was time for her little one to take its first steps in the outside world.

“We were all holding our breath with excitement as the cub tottered around, using all its strength to clamber after mum – it was incredible to watch the youngster find its ‘tiger feet’ for the first time.”

The cub, which hasn't yet been named, was born in the early hours of Sunday 12 December to parents Gaysha and Asim, and is reportedly doing well. Keepers will discover whether the cub is male or female at its first health check in only a few weeks' time.

Today (20 May) marks the fifth annual World Bee Day, which raises awareness of the importance of bees and pollinators to people and the planet. Observed on the anniversary of pioneering Slovenian beekeeper Anton Jana's birthday, this year's celebration is themed: 'Bee Engaged: Celebrating the diversity of bees and beekeeping systems'.

Organisations and people celebrating the day will raise awareness of the accelerated decline in pollinator diversity, and highlight the importance of sustainable beekeeping systems and a wide variety of bees. Slovenia, the initiator of World Bee Day, will be focusing on teaching young people about the significance of pollinators.

Project to tackle sheep scab in Northern Ireland
27th May 2022

Vets set out vision for post-Brexit trade
27th May 2022

Three cases of highly pathogenic avian influenza (HPAI) H5N1 have been confirmed in recent days, bringing the total number of cases in England to 98.

On Thursday, the APHA confirmed two cases of HPAI H5N1 near Redgrave, Mid Suffolk and Market Weston, West Suffolk. A case H5N1 was also confirmed in poultry at a premises near Southwell, Newark and Sherwood, Nottinghamshire.

Protection and surveillance zones are in place around the affected premises. Further details are available at gov.uk